International Rifle Benchrest (IRB) class is also shot for score but only at 50 metres.

The majority of rifles are custom built and currently there are several custom benchrest gunsmiths in Australia who build winning rifles.  Ask a benchrest captain or competitors for details.

All Rimfire rifles must utilise only ammunition that is commercially available, lead projectile type in .22LR whereas most Centrefire rifles utilise hand loaded ammunition.

Specifications for the various classes of rifle can be gleaned from the SSAA web site, Disciplines, Benchrest in Rule Book Pt.A and Pt.B

Most SSAA ranges have a benchest section and persons interested in taking up benchrest shooting should contact the benchrest captain, spectate a match, ask questions or come along and have a go.

Major Benchrest shoots in Australia are:

Centrefire Group National Championships are held every Easter, over four days on a rotational basis around Australia, where ranges have the designated requirements for registered matches.

.22LR Rimfire Group and IRB National Championships are held annually on the October long weekend, over four days on a rotational basis around Australia but not at Easter on ranges with all the designated requirements for registered matches.

Benchrest for Score National Championships are held annually around over four days at a range, at a time suitable to the host State and Benchrest Chair, and with all the designated requirements for registered matches.

Australia Day Matches are held in Canberra at the end of January over two days, usually for light and heavy benchrest rifles

Other States hold their State Championships at various times throughout the year and welcome interstate shooters to compete.

Match schedule for all matches Australia wide can be found on each State’s web site as well as well as on SSAA National’s site.

Group sizes are determined by measuring from centre to centre of the two widest shots in the group.  The ultimate group of.000 has never been achieved anywhere in the world despite the sport being around since 1948.

In Benchrest for Score and IRB one shot is fired on each of the scoring bulls.  Best edge scoring is used, in that if a shot touches or covers any part of the scoring ring then that score shall be given.

The official target for Benchrest group shooting is one sheet with a horizontal line midway – top half for record purposes and the lower half a sighter card.

On both the record and sighter target there are five concentric rings and an aiming mark with a border surrounding the rings and aiming mark.

The sighter section is the same configuration with the addition of two concentric rings in each lower corner of the border and the letter “S”.

The official target for Benchrest for Score is a score target with 6 bulls on it.  One bull will be a sighter and shall be enclosed in an area bounded by two border lines and two target edges.

Each bull shall have five concentric scoring rings starting with a 10 ring and decreasing by value of 1 per ring to a 6 ring.  Each bull will have an X ring being a filled circle.

The official target for IRB comprises 25 bulls (called rondels) within a framed square border.  Along the left and right hand side are sighter targets.

Each rondel shall have eight concentric rings starting with a 10 decreasing in value by 1 per ring to a 3 ring.  Each rondel will have an X ring of 1mm. 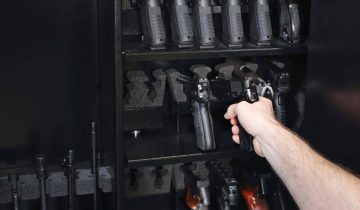 Safe storage of a firearm