During the 1990’s, shooters asked the SSAA to investigate a sport that would provide its members the opportunity to use firearms of the type carried by Australia’s early settlers.  These settlers came predominantly from England, Scotland and Ireland, with the gold rushes of the 18

50s in particular bringing a mass of migrants to Australia.  Collectively, our early settlers brought an array of firearms comprising a range of technologies and nationalities to the new colonies. 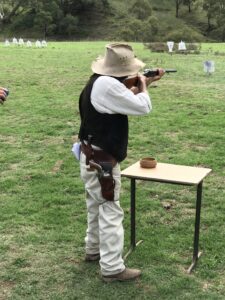 The purpose of Colonial Shooting is to provide a safe, enjoyable and competitive shooting discipline for all participants in an historical context.  The shooting discipline is dedicated to the remembrance of a past era that charts Australia’s development from an isolated colony to an independent nation.

For the purposes of the Colonial Action Discipline, the” Colonial” period has been defined as the years between circa 1850 and Federation on 1 January 1901. This recognises that the colonial period ended when the Commonwealth of Australia was inaugurated.

Participants in Colonial Action are required to use original or reproduction firearms typical of mid to late nineteenth century Australia to engage various targets in a course of fire. For example, competitors may use any revolver, replica, or look-alike thereof that was in production prior to 1901.  This includes modern reproductions of percussion, percussion conversion, single action and double action revolvers.  Revolvers must have minimum calibre of .32 unless otherwise authorised by an event or host club.  For example, .22 Calibre revolvers may be used where required by a stage design or where offered as an Optional Category.  Main Stage scenarios also typically incorporate the use of Level Action rifles, double-barrel (side x side) shotguns and single-shot Martini .310 Cadet rifles.

Each course of fire is unique and must be undertaken by the competitor in a set sequence. Shooters compete one at a time, sometimes moving between firing points, reloading and handling a variety of firearms against the clock. The competitor’s time for completing a course of fire is recorded and any misses or penalties incurred are added to that time.

In addition to the main event, competitions may also offer side events such as “speed pistol”, “speed shotgun” and “speed rifle” as well as long range events, including events for muzzle-loading rifles.

The Discipline’s authenticity is not restricted to the use of period firearms; participants are encouraged to wear clothing and accoutrements from the Colonial Period.  Participants may also choose the style of their own authentic outfit from a range of over 50 years of historical fashion and uniforms.

The rules aim to provide an uncomplicated set of procedures for all participants that will promote a safe and functional shooting sport. The flexibility of the rules allow for a choice of firearms, period costuming and event-related stage designs while providing for the established procedures of safe range practice.

The traditional “home” of Colonial Action is the SSAA Mudgee Branch, and competitions are conducted on Range 1 at the very picturesque Windamere Regional Shooting Complex, 35km south of Mudgee.  There are four main competition shoots per year each conducted over a full weekend in March, May, September and November (the November shoot being “Western Action”).  There are camping areas for swags, tents or caravans adjacent to the Range, with toilet and shower facilities available.

If you are a shooter with an interest in our Colonial past, we’d love to see you at one of our regular competitions.  Alternately, if you are interested in establishing Colonial Action at your local club, we’d be happy to assist you in any way we can.  And, if your Club already shoots Colonial Action, it would be great to hear from you.